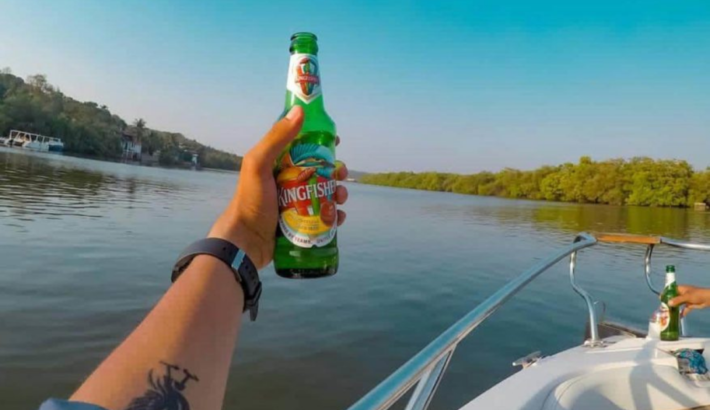 Why is a sunset cruise in Goa incomplete without Beer & BBQ

Why is a sunset cruise in Goa incomplete without Beer & BBQ

Many people in Goa have a common misconception that a good time with some buddies can only be had at a fancy pub or some overpriced resort. But we’re here to tell you otherwise. There’s one place where hanging out with your squad simply does not compare with anything else. And that’s a sunset cruise in Goa of course. And what better way to spice up your yacht ride in Goa than with Beer, live BBQ and friends.

So grab yourself a friend or two along with some beer if that’s your thing. And come along for the ride. Here are 5 Reasons why you must not miss out on a beer and BBQ evening on a yacht during your sunset cruise in Goa.

5. The view is out of this world

Few other places on the planet compare to the view of the oceans along Goas coast. Standing on the deck along with your buddies can be a great experience. That everyone is guaranteed to cherish for years to come. Sunset cruises in Goa are some of the best in the world. There’s so many spots that you’ll be spoilt for choice.

If you need a sunset cruise in Goa ASAP, then you simply can’t go wrong with the pristine mandovi alongside Panjim City. Especially after 6:30 PM when the neon signs and casinos light up like Christmas. Add some hot BBQ and cold Beer to the mix and you’ve got yourself a killer deal.

4. The Weather is Perfect

Hate that constant flooding year after year? Year round smog got you on your nerves? Winters are too cold but the summers are too hot? Goa doesn’t care. It’s pleasantly sunny for the better part of the year. While the moderate monsoons bring much needed lush greenery. You will never find anyone complaining about Goa’s perfect climate. Ever.

So it only makes sense to have a sunset ride in Goa in this weather. Even better if there’s some light drizzle. In fact, a great alternative to BBQ and beer would be some hot and fresh pakoras and tea.

3. The beaches make for a great sunset cruise

Yes, as cliche as this might sound. Goa does have some really impressive beaches that even give places like Hawaii a run for its money. Despite being one of India’s most popular holiday destinations for decades, Goa still boasts some of the best beaches in the country, with white sand, coconut groves and the sparkling, blue Arabian sea stretching along the entirety of the state’s coastline.

While the central regions are crowded, if you venture north or south far enough, the coastline offers an absolutely stunning spot for a sunset cruise in Goa like no other.

Agonda and Palolem are some of the best in the south, while Ashvem and Mandrem are the least crowded in the north. With about thirty beaches strung along the state, you’re guaranteed to find the perfect one for your luxury yacht sunset cruise in Goa.

2. It makes for a great sunset cruise photo session

Goa and scenic pictures are a timeless combo. So when in Goa, a sunset picture is a must try ritual. A classic sunset photo session from Goa’s beachfront is cool and all. But a view overlooking the Arabian Sea? Now that’s called picture perfect. Better yet from a slow paced yacht alongside friends. Shots like these steal the show like crazy and are guaranteed to get you some Dan Bilzerian – esque likes.

Even better if you have a drone. And yes we at Funcruises Goa rent those too.

1. It makes for a great short dance party

What better way to make the best use of your Luxury Yachts in built sound system than dancing. The sunset background makes for the perfect open air dance party vibe. Some Goan music like ‘bebdo’ and ‘hanv saiba poltoddi vetam’ sets the mood just ride for a Goan dance party. Add some live BBQ and Beer and your sunset cruise in Goa just reached a whole new level. Try not to go overboard dancing tho 😛 (although all our cruises have all the best safety equipment just in case you do).